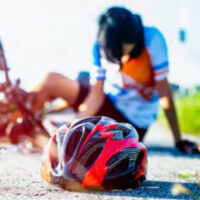 It was back in 2012 when the National Highway Traffic Safety Administration (NHTSA) revealed some disturbing statistics about bicycle accidents: That year, 726 bike riders were killed and another 49,000 injured in incidents involving motorized vehicles. In response to these numbers, California lawmakers passed the Three Feet for Safety Act – a law that establishes certain requirements for bike “buffer zones.” By increasing the distance between automobiles and bicycles, it is possible to decrease the number of fatalities and injuries to cyclists.

How Bicycle Buffer Zones Protect Riders: The term “buffer” refers to the space around the bicycle rider and designated bike lane, if one is present. In some areas, the bicycle buffer zone may be marked with painted strips or other images; the California statute provides that, in the absence of markings, drivers must keep a three-foot distance from bicycle riders when passing.

Researchers report that buffered bicycle zones are more effective than simply making the designated bike lane wider because the space is not directly adjacent to moving traffic.  Plus, the zone reduces the potential for cyclists to “get doored” by the driver of a parked car exiting the vehicle.

Motorists’ Duties Under California Law: California’s Three Feet for Safety law includes enforcement provisions that impose sanctions upon drivers who do not comply with the buffer zone factors. If they fail to allow at least three feet when overtaking a bike rider, police may issue a ticket ranging from $35 to $100 for a first-time offense. A second and subsequent offenses could mean a fine up to $250, and there are additional consequences if a violation of the law causes a bicycle accident.

Safety Tips to Avoid Bicycle Accidents: Bicyclists should note that they also have responsibilities related to the buffer zones. You should always ride well within a designated bike lane and/or as far away from the zone as possible; never travel within the bike buffer zone unless you are making a maneuver to pass through it, such as to make a turn. Additional tips, besides the obvious recommendation to wear a helmet, include:

Reach Out to an Oakland Bicycle Accident Lawyer About Your Options

Bike buffer zones are a good start with respect to reducing the frequency of bicycle accidents, but riders will always be at risk of serious injuries when they share the road with negligent motorists. If you were injured or lost a loved one, please contact the Oakland bicycle accident attorneys at Venardi Zurada, LLP to schedule a no-cost case evaluation at our offices.